As climate change negotiations advance, it is becoming increasingly clear that there is a greater need to shift the focus on developing countries since the international negotiations have not adequately addressed their priorities for sustainable development, support for adaptation activities, aid assistance and technology transfer. This is because affordable and accessible modern energy services along with poverty reduction are essential to achieve sustainable development. Lack of access to these services adversely affects public health, constrains educational opportunities and impedes human development and well-being of nearly 1.6 billion people in developing countries. However, the proponents of climate change argue that affordable energy—in the form that is currently available—is also the cause of climate change. Hence, it is important to integrate development policies with

39 See Chapter 9 (this volume) for an analysis of commercialization.

that of climate change, which means reconciling development and climate priorities. This means that countries must improve the prospects of integrating climate policy into development considerations, and vice versa. The key is to identify such sustainable development policies and measures (SDPAM) and promote them. The concept of SDPAM has been explored in the research community, including detailed case studies of policies in several developing countries.40 Winkler et al. put forward this approach mentioning that the policies and measures that are firmly within the national sustainable development priorities of the host country should be integrated into climate policies.41 However, a great deal of work remains to be done to explore the operational implications of this approach as part of an international policy framework. Bradley et al. have suggested that the use of SDPAM in developing countries gives an automatic recognition to climate policy, facilitates sharing of knowledge and expertise across borders, involves actual engagement in climate mitigation efforts rather than just providing lip service, and promotes both development and climate goals.42 The benefits that accrue to the society (economic, social, environmental, public health, and so on) independent of any direct benefits from mitigating climate change can be referred to as 'co-benefits'. The IPCC Third Assessment Report on Mitigation differentiates 'co-benefits' as benefits intended as the primary objective of certain actions or policies from those that are secondary or incidental to it, which are named simply as 'ancillary benefits' for developing countries.43

The literature shows that several countries have already demonstrated the benefits (reduced poverty, increased employment opportunities, improvements in health, energy and food security and infrastructure) of an integrated approach.44 For example, the alcohol fuel programme in Brazil has provided significant economic and environmental benefits along with employment opportunities for hundreds of thousands of poor smallholder families (900,000 relatively well-paid jobs were created) in the Brazilian northern and north-eastern regions. The programme has helped to reduce its dependency on oil import; between 1975 and 2002, in terms of foreign

exchange savings, the programme has saved about USD 52 billion (January 2003 USD). It has also considerably reduced local air pollution in the cities.45

According to a study by Dubash and Bradley,46 the rural electrification programme in India can have significant local as well as global benefits. The study suggests that there are significant climate benefits to off-grid renewable energy that have not been explored in recent planning initiatives. The recent study by the Asian Development Bank (ADB) and Clear Air Initiative (CAI-Asia)47 identified a menu of short- to long-term transport policy interventions, which can bring about the most reduction in CO2 emissions in the transport sector. The proposed measures include interventions in vehicle fuel efficiency, transport demand management, transport and land use planning and biofuels. These measures reduce total fuel consumption significantly and land-use planning contributes to more reduction in CO2 emissions.

China's CDM is an example of similar success. World Bank-led study on the CDM market potential suggests that China will capture about 50 per cent of the world's CDM market in 2010.48 China's growing belief that CDM would play an important role in future global efforts to mitigate climate change has led China to gradually recognize the importance of capacity building at national, local and enterprise levels to ensure that China is well positioned to take advantage of CDM opportunities. This is in line with rules and modalities the UNFCCC have agreed upon to make the CDM fully operational. The CDM will channel private sector investment into emissions abatement projects in developing countries. In this way, it will promote sustainable development in these countries while offering industrialized governments credits against their Kyoto targets.49

A pledge-based approach by countries with bilateral and multilateral funding can bring in more success.50 A potentially important network is the CAN, which the UNEP is currently in the process of establishing in consultation with various stakeholders, including the governments of China, Indonesia and Pakistan. The objective of this network is to facilitate a more effective participation of Asian governments in climate-related negotiations. Although the planning for the network as far as known now is

not specifically focused on co-benefits, it is clear that the establishment of the first formal climate network incorporating governments in Asia offers strong possibilities to integrate the co-benefits approach.

However, there are certain trade-offs between certain aspects of development and addressing climate change, for example, food security versus energy security. Promoting large-scale bioenergy production is a prime example of a policy where trade-offs between food security, biodiversity and climate change have to be made. In terms of costs and benefits, one has to weigh higher costs of clean energy systems against social and economic benefits.

This requires collaboration on multiple levels and from various perspectives. Greater effort needs to go into generating ideas from within developing countries and sharing them with the international community. The driving forces for the promotion of a sustainable energy path may shift increasingly from regulation to opportunity. While for a long time businesses adopted strategies of avoidance and outright resistance, in recent years an increasing number of them have begun to explore the profit potential of clean energy technologies (Figure 3.2).

In short, economic prosperity, human development and environmental benefits should move hand-in-hand. Conversely, high-energy use places an enormous burden on long-term economic development and poses critical problems to improving living standards, particularly those from the developing countries. Inefficient technologies become a drain on factories, machinery and resources, affecting competitiveness. Hence, it is important to invest in the efficiency of the energy supply systems and reduce losses on the demand side. However, it is a matter of disagreement how many opportunities are available, and what percentage of an environmental target can be achieved with efficient technologies and win-win options. Nonetheless, it can be safely argued that there are plenty of these no-regrets opportunities, and that development can be achieved through these options and climate change can be mitigated in a cost-effective way without undermining prosperity.51

Getting Started With Solar

Do we really want the one thing that gives us its resources unconditionally to suffer even more than it is suffering now? Nature, is a part of our being from the earliest human days. We respect Nature and it gives us its bounty, but in the recent past greedy money hungry corporations have made us all so destructive, so wasteful. 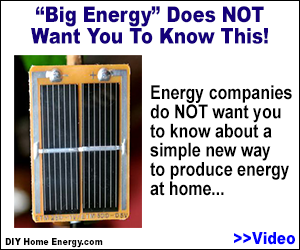